The Road to Restoration

She made the last ever flight of any Britannia when she was delivered to Cotswold Airport (ex RAF Kemble) in Gloucestershire on 14th October 1997.

XM496 is cared for by the dedicated team of the XM496 Preservation Society. This group is made up of formally trained professional Britannia Ground Crew and Air Crew plus dedicated enthusiasts.

Built as part of Contract 15527 and delivered to Royal Air Force Transport Command at RAF Lyneham on 17th September 1960 and given serial number XM496 and named ‘Regulus’. She was taken on charge from the 19th September and used within the ‘Britannia Pool’ of 99 and 511 Squadrons. After 15 years exemplary military service XM496 was withdrawn from operational RAF use in October 1975 and stored at RAF Kemble with 18,414 hours and 8,122 landings to her credit.

A short history of Commercial Service:

On January 6th 1976, XM496 was purchased by Monarch Aircraft Engineering Ltd and delivered to their base at Luton. She was converted at Luton to 253F standard and registered G-BDUP on 31st March 1976. Following conversion she was painted in the livery of Afrek Ltd who had purchased her in the May and was delivered to their base in Athens on 6th June 1976 with a commercial Certificate of Airworthiness (CofA). After seeing service mainly in West Africa and six years on she was withdrawn from use and stored at Athens pending sale.

In July 1984 Monarch Aircraft Engineering Ltd again re-purchased G-BDUP and ferried her back to Luton for complete overhaul pending sale to the Cuban airline, Aerocaribbean. In August of that year she was painted in their full livery, registered CU-T120 and flown to Havana by an Aerocaribbean crew in October. In March 1990, while flying between Peru and Havana, No4 engine had to be shut down.  An emergency was declared and a priority landing made at Guayaquil, Ecuador. The following day a three-engine ferry flight was arranged and on arrival at Havana she was grounded due to lack of spares. CU-T120 had operated her last flight with ‘Aerocarib’ and this ended all Aerocaribbean Britannia Operations.

Ultimately CU-T120 actually emerged as the ‘Phoenix’ of the Britannia fleet when she became the only remaining airworthy Britannia in existence. Due to the expertise and determination of Britannia aficionado John Byrne, the Technical Director of Transair Cargo, Zaire, a sale was agreed with the Cubans and an engineering team led by John spent the best part of twelve months making her airworthy again by ‘robbing’ other parked airframes for suitable spares. The aircraft was flown to Zaire from Havana via the UK as 9Q-CJH  “Jack”, departing Havana on September 10th 1993 and arriving at Kinshasa on the 26th of September. She immediately went into service carrying freight to all corners of Zaire, a country that had very little in the way of a usable road network.

Due to political unrest in Zaire in 1997, Transair, decided to remove the aircraft to a place of safety and once again a three-engine ferry flight had to be made although this time to Lanseria in South Africa arriving on the 4th May. Removed from the ‘Register of Aircraft’ by the now renamed Democratic Republic of Congo, she was re-registered in Liberia as EL-WXA in August 1997 while still at Lanseria. Following a Company decision not to operate the aircraft again on commercial charter services, she was flown into preservation at Kemble (Cotswold Airport) by way of Douala in the Cameroon and Majorca and placed into the care of a dedicated group of Bristol Britannia enthusiasts. The aircraft has since been repainted in RAF Transport Command livery resuming her original identity of XM496 ‘Regulus. XM496 never flew again although regular engine runs were carried out for a while until a lack of available engine spares and the cost of insurance finally put paid to this ‘crowd puller’! Today ‘Regulus’ exists as a prime example of British expertise and the ‘must have’ photo has to be posing on the newly refurbished flight deck of this magnificent aircraft. 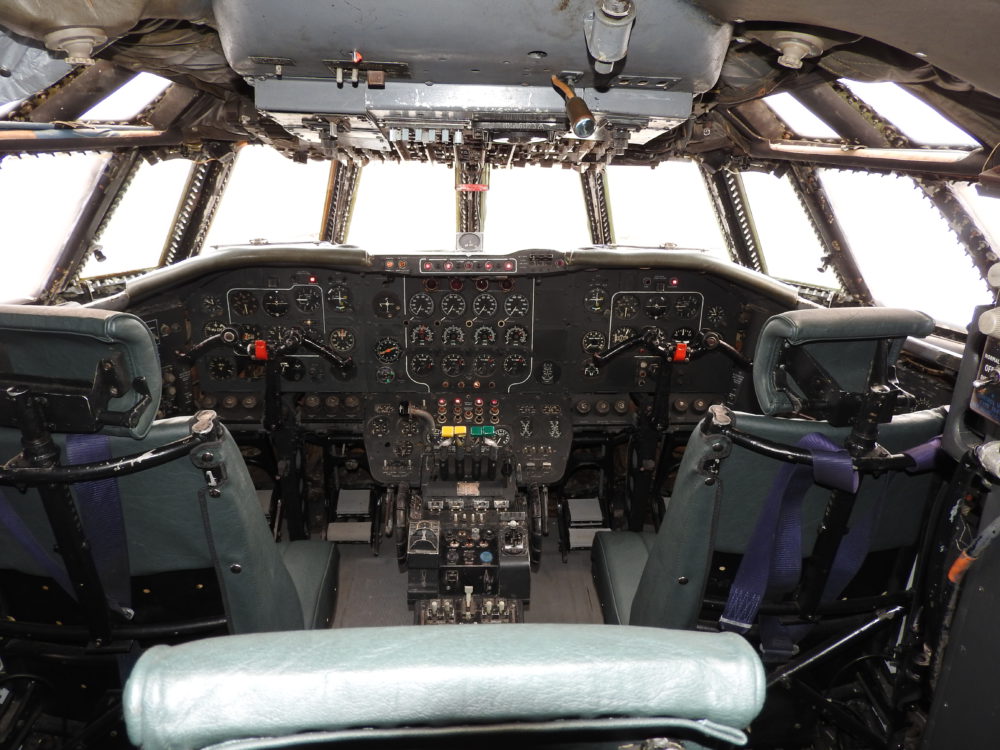